It’s quite surreal and a little funny what you see when you take the boat to Lazzaretto Vecchio, the old plague hospital right next to the Lido Island.

At the end of a quiet and airy brickstone hall, there are about thirty people sitting in white chairs attended by a few organizers who watch on and talk in hushed tones. The people in the chairs move their heads in this direction and that, the rustling of their clothing and scraping of their shoes on the floor making a strange off-beat rythm, that doesn’t really make any sense watching from the outside. Of course they are wearing VR-googles and headphones so they look a bit like a mix of robot and predator bird, but without the proud energy. Most of their bodies are very relaxed with an occasional finger twitch or a slow, dreamlike movement – the only signs that give away their agency.
Putting on the head gear myself I am very aware of being vulnerable to the kind of outside view I just described. With the headphones on I can’t even hear if somebody moves closer to me. The power I’m giving up for the time is not insignificant and a little scary. Reality shrinks (or expands, it depends on who you ask) to the 360 screen in front of my eyes and it’s controlled by the guy in the glasses at the laptop behind me. I don’t know him, I have never met him, It’s kind of weird and a little disturbing, because you can’t look away unless you take of the googles, which I do several times during the screening.
It turns out that the experience really is very immersive, even without high definition graphics and I walk away excitedly talking to my friend. The part of reality you give up seems to be mirrored by another kind of experience. (If the exchange is equal? I’m not so sure.) In any case the possibilities for story telling are very interesting and Venice Film Festival is comitting on a Biennale College Program just for VR-filmmaking in 2017/18. Meanwhile some journalists cite the power of VR to move people to action and pledge their money to NGO causes. It will be interesting to see if this power wanes when more fiction formats are developed for VR and the unusual and new experience becomes a little more everyday. 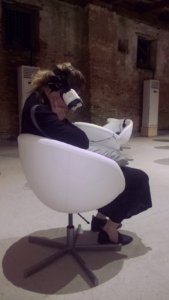